It is such a beautiful stretch of coast that the famous Italian poet Eugenio Montale sang its praises in his poems.

This marvelous territory develops entirely in the province of Imperia and lies between the state border between France and Italy, in Ventimiglia, and Capo Mimosa in the municipality of Cervo.

The Riviera dei Fiori offers unique views and panoramas: the sea, nature and the many medieval villages with which both the coast and the hinterland are dotted, make this stretch of Riviera an ideal destination for holidays, all year long.

Map of the Riviera dei Fiori

The Riviera dei Fiori is full of cities and villages that represent real holiday resorts chosen by thousands of travelers every year.

the hinterland is rich in silent and fascinating medieval villages, including Taggia, Dolceacqua, dominated by the Doria castle and the traditional bridge over the Nervia, Pigna, a village with a great gastronomic culture, Apricale, one of the most beautiful villages in Italy known for the castle of the Lucertola, Rocchetta Nervina, the town of fairy tales, Perinaldo, Triora, the town of witches, and Pieve di Teco.

The coast along the Riviera dei Fiori is very varied and is perfect for satisfying the most diverse tastes: from wide and sandy beaches to rocky stretches with deep waters, a typical variety throughout the Ligurian Riviera.

From the medieval villages perched on the hinterland hills, you descend to the sea, where the panorama becomes more typically Mediterranean, through olive groves and Rossese vineyards.

Here on the coast the main tourist resorts of the Riviera dei fiori are: 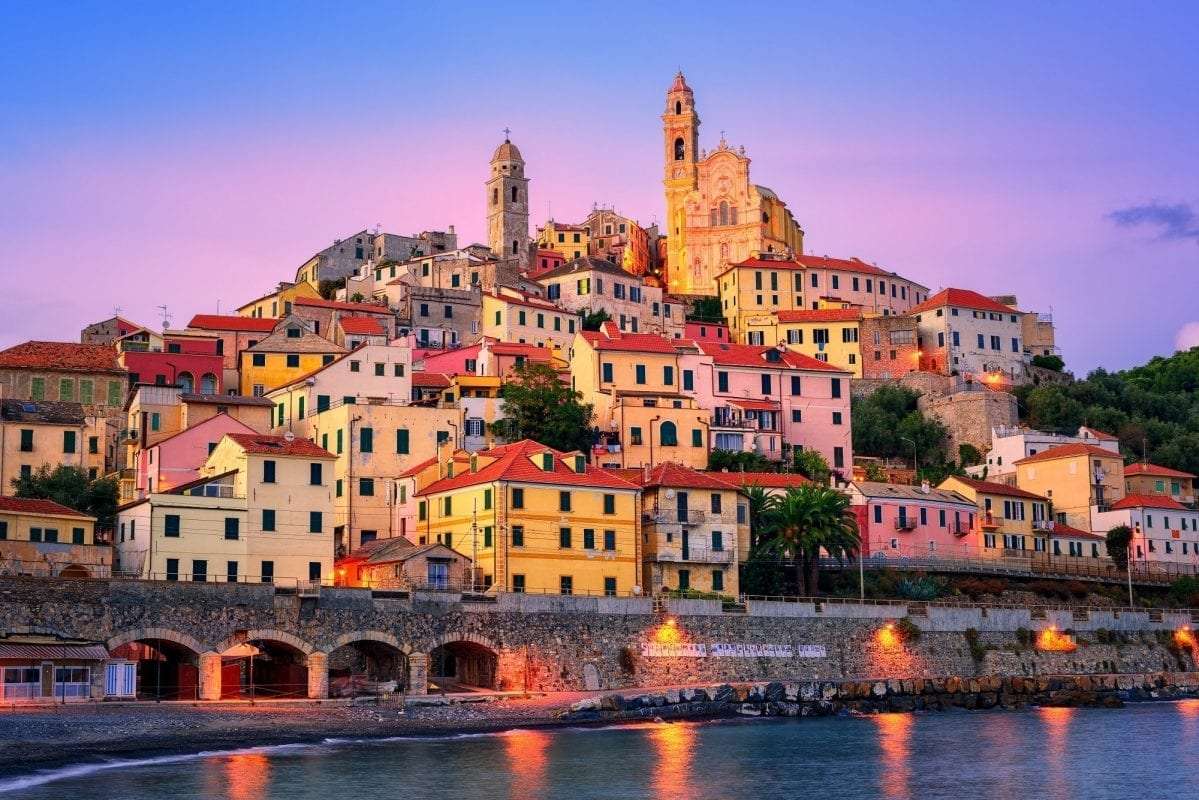 Sanremo retains all the charm of the Middle Ages in the “old town”, the district also called the Pigna for its characteristic shape: a labyrinth of alleys, stairways, arches, covered passages that branch out in concentric rings from the top of the hill.

At the top of the historic district is the Sanctuary of the Madonna della Costa from which you can enjoy a magnificent view of the Riviera dei Fiori.
Further down, history leaves room for glamor and fashion with via Matteotti, a commercial street full of designer boutiques.

In this elegant course you can see the testimonies of the “Belle Epoque” such as Palazzo Borea d’Olmo , the Municipal casino and the Russian Orthodox Church.

Going down towards the port you must absolutely make a stop in Piazza Bresca where numerous bars and fish restaurants animate the area, by day, but above all by night.

Also worth visiting are Villa Nobel where the famous Swedish scientist lived and died, and the botanical gardens of Villa Ormond , both magnificent testimonies of the 1800s. 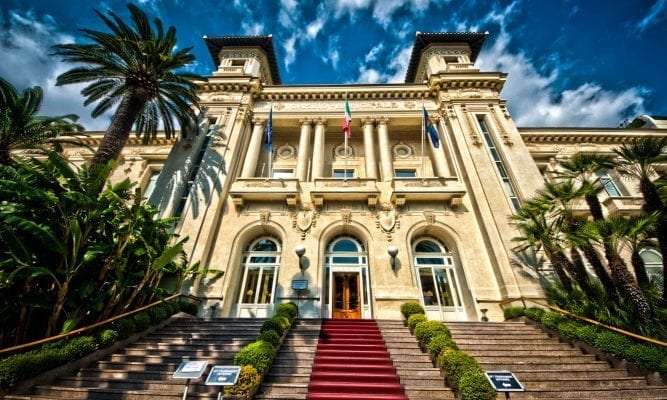 Bordighera stands out for its pleasant climate both in winter and in summer.
This seaside town is appreciated among the many places in Liguria for its elegant architecture and for the constant presence of nature and greenery in every corner.

The sea of Bordighera , for several years now, is steadily at the top of the cleanest seas of Italy awarded with the blue flag.

The wonderful historical center of the city is very well-kept and full of restaurants where you can taste typical Ligurian cuisine.

During your visit to Bordighera you cannot miss the church of Sant’Ampelio , built in the southernmost point of all Liguria, the walks on the promenade, completely pedestrian, a visit to the Pallanca Exotic Garden and to the huge monumental plants hidden in the most corners characteristic of the city.

Bordighera is also the right city for a nice aperitif before the evening: National Geographic has included the sunset of Bordighera among the 10 most beautiful sunsets in the world. 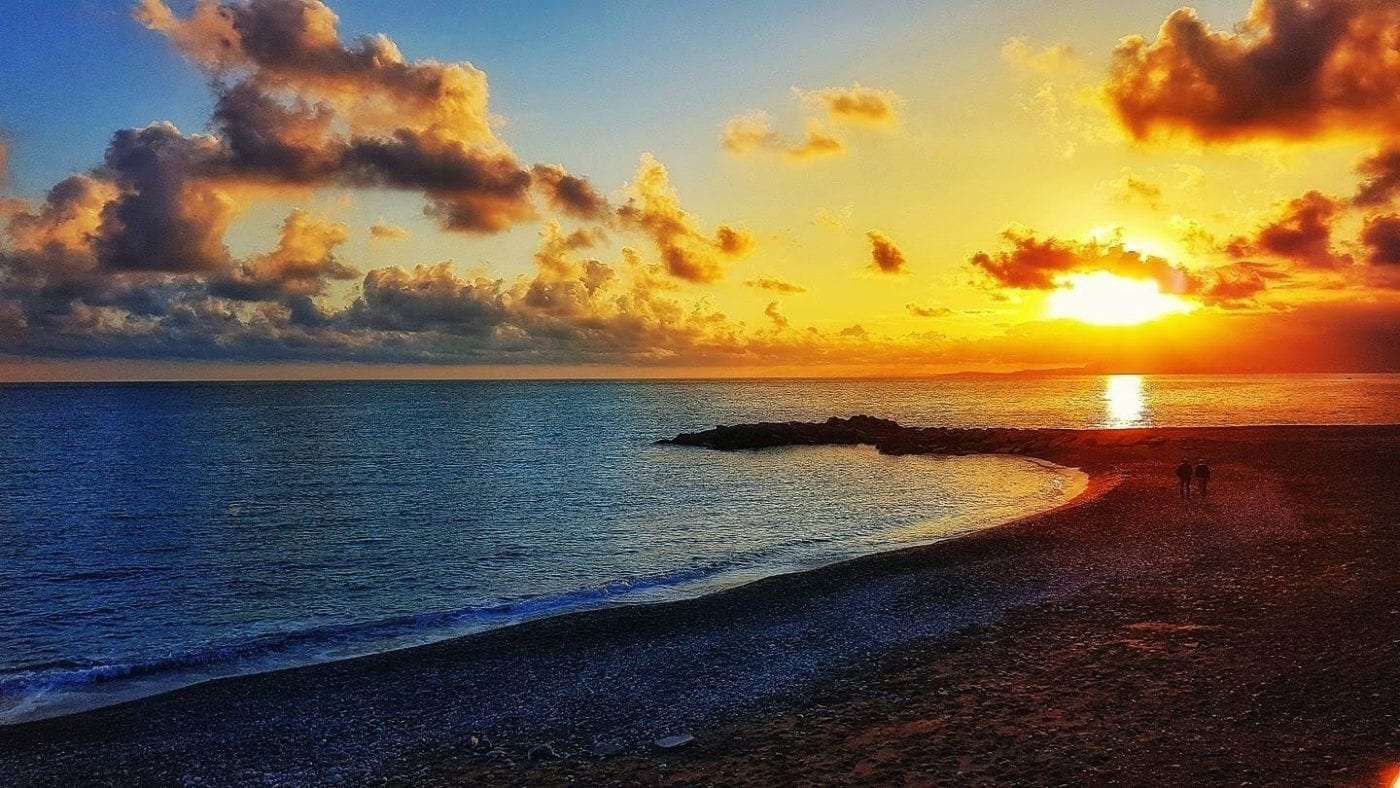 Cervo is an ancient village. Very suggestive overlooking the Dianese gulf and for many years it has been counted among the most beautiful villages in Italy.
The best way to see deer and get lost in its narrow streets. The whole historic center is pedestrian: silent, it is an invitation to stroll, despite the continuous climbs and slopes that are not always easy.

Diano Marina is a town of elegant hotels, buildings with Liberty decorations hidden among the trees of the avenues and beautiful villas illuminated by the sun.
Its golden beach is more than 3 km long and starts next to the marina and ends at the foot of the Capo Berta cliffs.

San Lorenzo al Mare, with an area of ​​just over a square kilometer, is the smallest municipality in Liguria. The current town is the result of the merger of two different villages born on the two banks of the Rio San Lorenzo.

From here begins the wonderful cycle path of the Ponente Ligure. 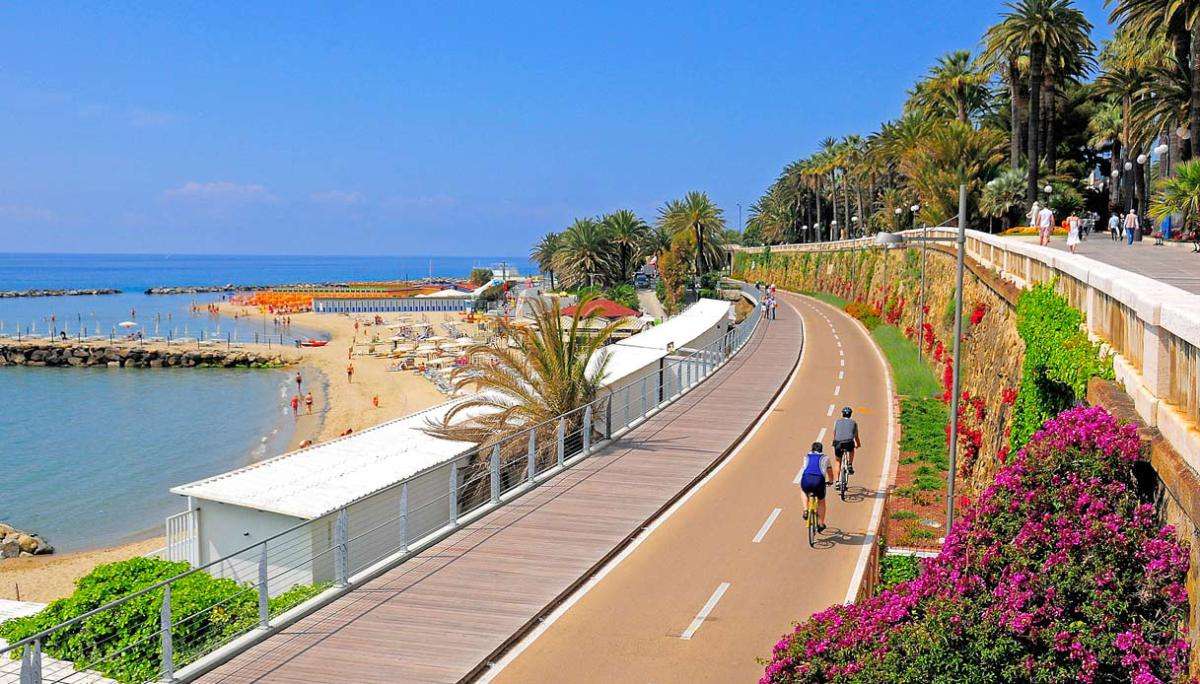 The cycle path of the Riviera

They say it is the most beautiful cycle path in Europe : maybe a ranking doesn’t exist, but this great recovery work has something extraordinary. It took years of work to see it inaugurate, the Giro d’Italia and Milan-Sanremo to celebrate it, but now the cycle path between San Lorenzo al Mare and Ospedaletti is a reality.

For at least eight, nine months of the year, cyclists, runners and pedestrians walk it.

Retired in 2001, the old Ponente railway line inaugurated in 1872 has been transformed into one of the most beautiful cycle paths in the world, squeezed between the sea and the mountains, capable of offering glimpses of rare beauty and of leading those who follow it between beautiful villages and quiet beaches along the Riviera dei Fiori.

Today, the whole area around the town has been enhanced and is part of the Riviera dei Fiori coastal park. If once on the train that passed here noble Italian, Russian and English owners were traveling, today tourists from all over the world pedal or walk on the track .

The cycle path, precisely because it stands where the train once passed, has space for two comfortable cycle lanes and the pedestrian lane.
It has clear signs and along the way it is possible to eat in the numerous bars on the cycle path or not far away. 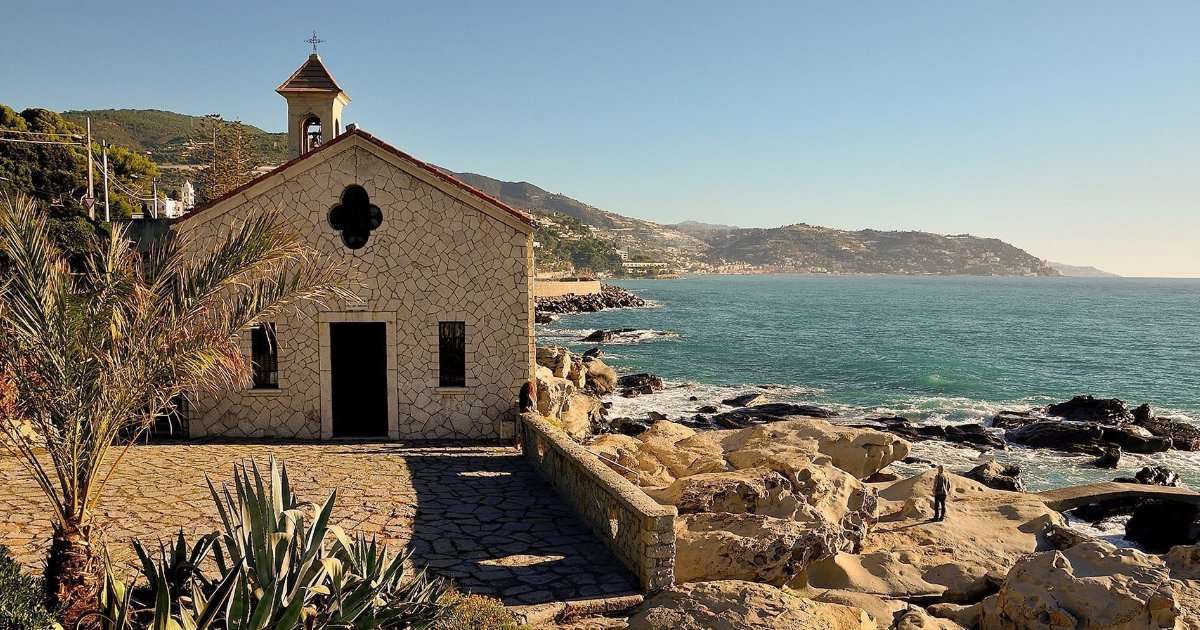 An enchantment on the sea.

The town of the Dorias. 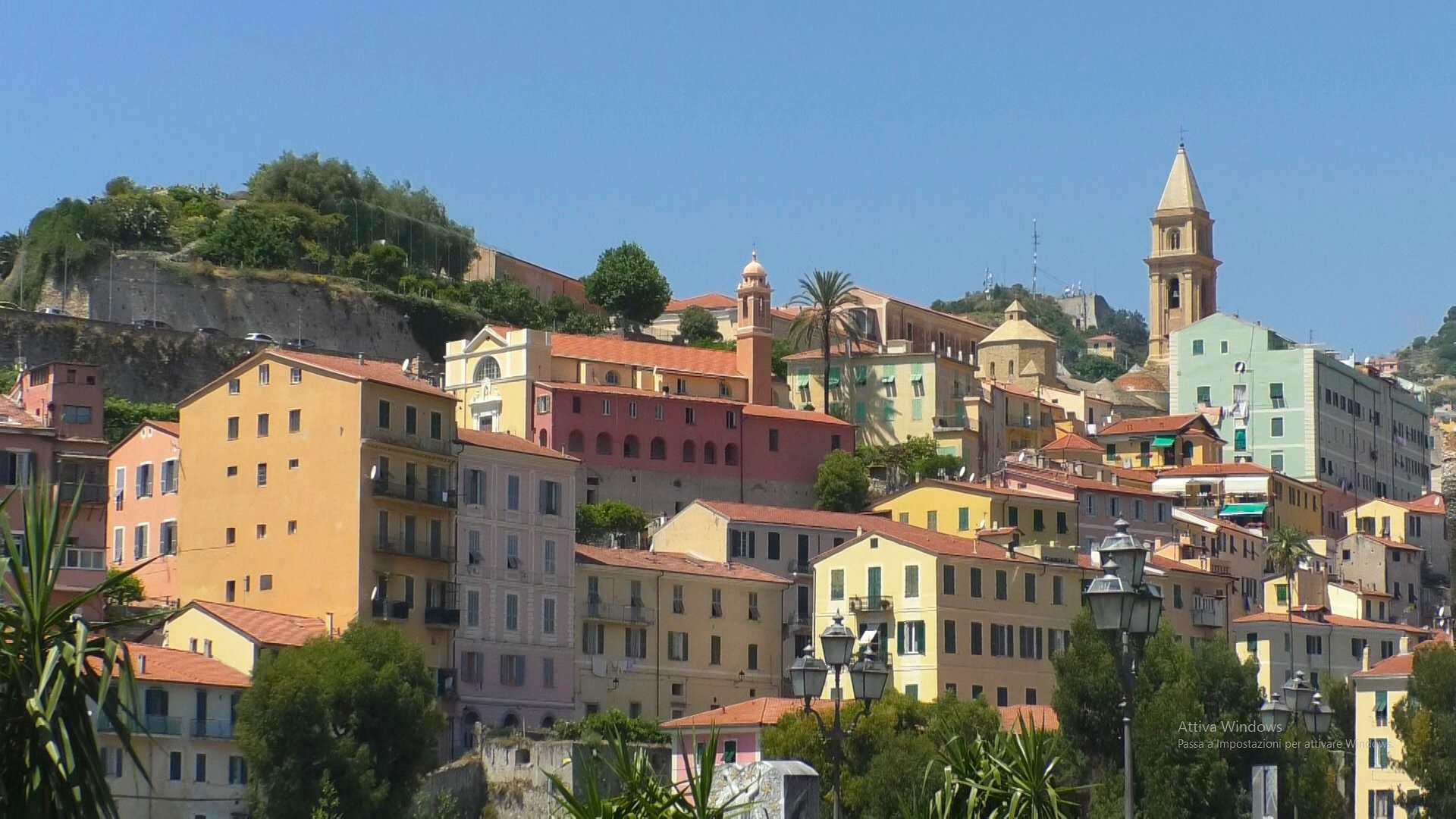 Beauty has no boundaries. 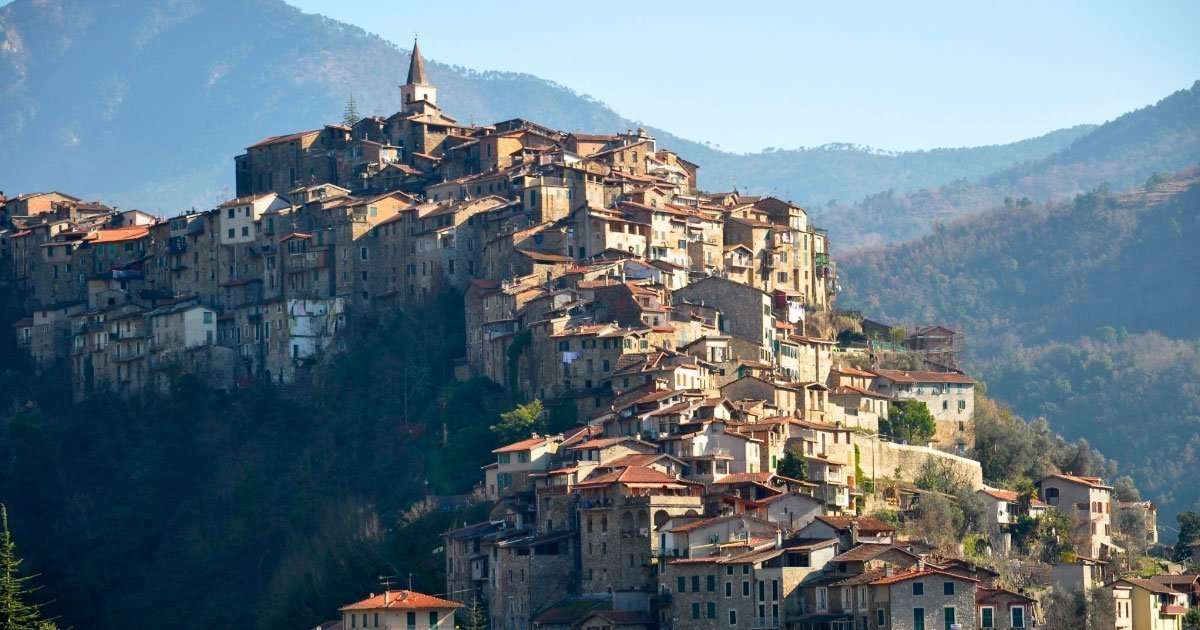 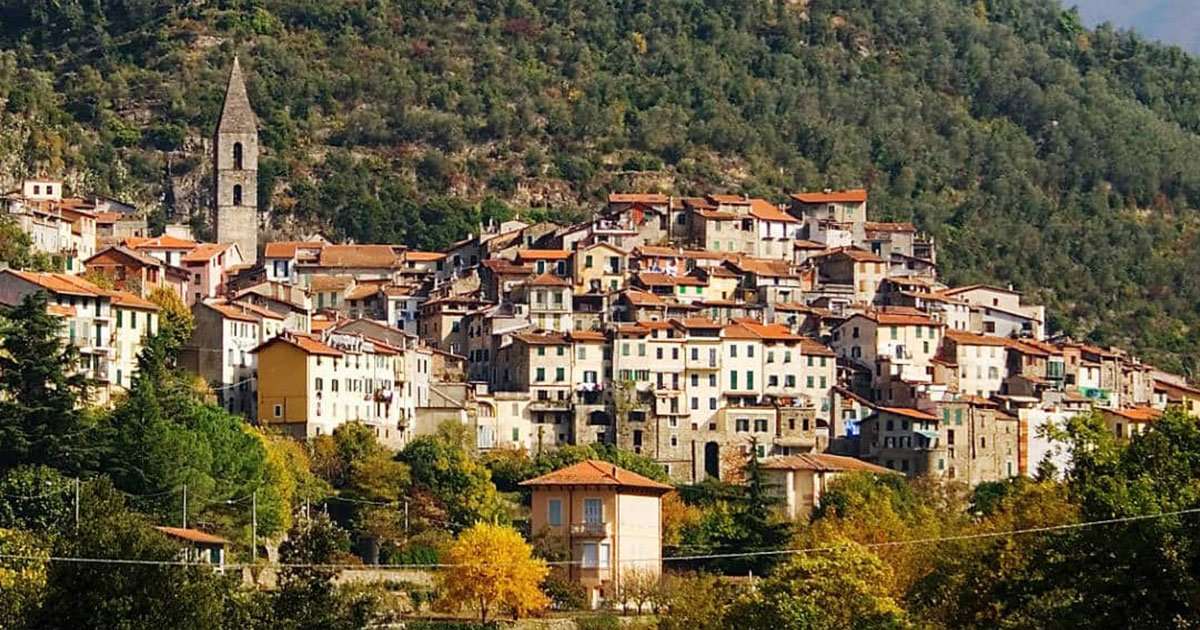 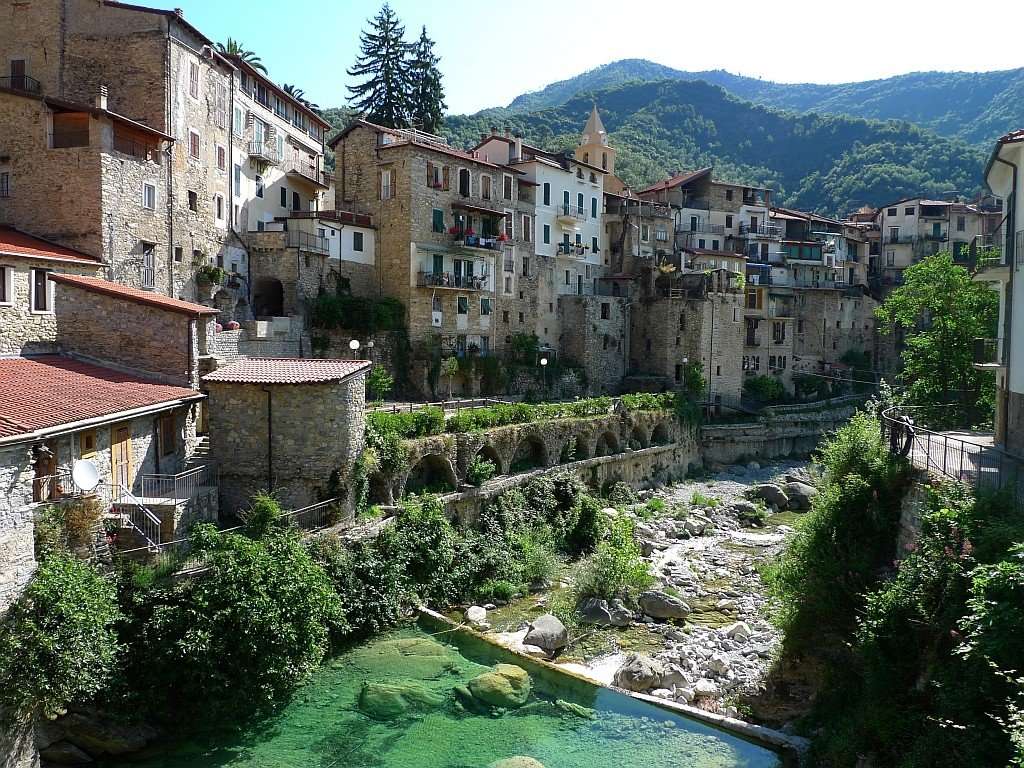